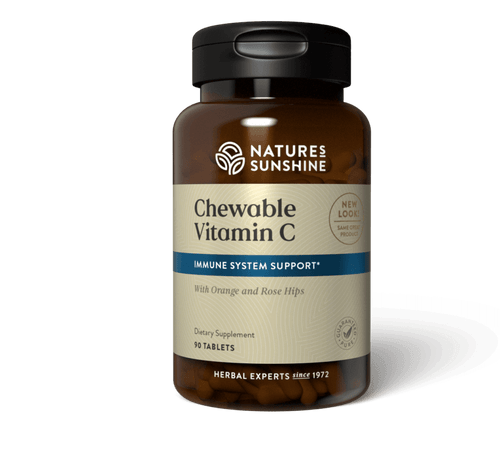 Like an old friend who’s always helping you out, Vitamin C does a ton--immunity, iron absorption, energy production, collagen synthesis, and more! But this antioxidant needs to be replenished regularly. These chewable tablets make it easy to get the vitamin C you need whenever you need it. Surveys show that nearly HALF of us have trouble swallowing pills or tablets. So a chewable option can save the day...and maybe your health! Decades ago, we created a chewable vitamin C tablet that’s loaded with valuable C plus natural citrus flavors and sweeteners so kids (and adults) have another option. Our Chewable Vitamin C is infused with wild-crafted rose hips grown in the mountains and forests of select eastern European countries, away from pollution, pesticides and radiation.

Vitamin C is an antioxidant, and it performs many functions involving the immune system and tissue development. It is involved in iron absorption and in the syntheses of enzymes, hormones and proteins. The adrenal glands need large amounts of this nutrient in order to support immunity and help produce energy. Vitamin C is easily washed from the body and needs to be replaced constantly. Without vitamin C, the body cannot make collagen, the substance that holds the body's cells together and maintains skin integrity.