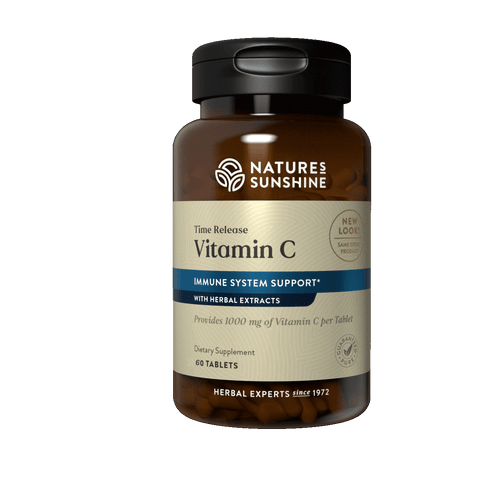 Vitamin C is water-soluble. It is not stored in the body, so you need to replenish it regularly through diet or supplementation. Our time-release technology provides for a slow, steady release of vitamin C over a six-hour period. This allows your body to use it more efficiently. Our complementary herbal base features lemon bioflavonoids, rutin, hesperidin and rose hips for extra phytonutrient support. Our lemon bioflavonoids are non-GMO, vegan and strategically sourced globally to ensure premium quality any time of year.  Also available in 120 tablet size bottle.

Vitamin C performs many functions involving the immune system and tissue development. It is involved in iron absorption and in the syntheses of enzymes, hormones and proteins. The adrenal glands need large amounts of this nutrient in order to support immunity and help produce energy. Vitamin C is easily washed from the body and needs to be replaced constantly. Without vitamin C, the body cannot make collagen, the substance that holds the body's cells together and maintains skin integrity. This product allows more efficient use of vitamin C by slowly releasing it into the body. Each tablet is designed with a sustained release profile to slowly deliver the vitamin C over a six-hour period.

Take 1 tablet daily with a meal.