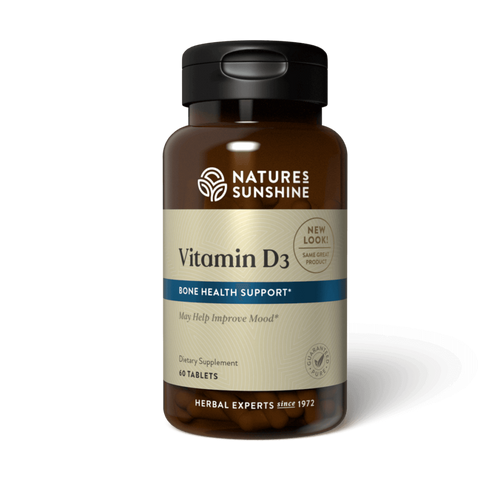 It’s hard to get enough of the sunshine vitamin when you don’t have lots of sun or time to be outside. Vitamin D3 offers a host of health benefits. It supports both the innate and adaptive branches of the immune system. It influences mood, and, along with calcium and other minerals, it supports bone health. On top of all these gains, Nature’s Sunshine’s Vitamin D3 partner supplies us with a super-clean nutrient; one that is proudly allergen-free and non-GMO project verified.

Vitamin D comes in two forms: D2 and D3. Of the two, D3 is more bioactive. The body synthesizes vitamin D3 from cholesterol and sunlight; which makes it difficult to obtain adequate amounts of vitamin D during cloudy or winter months. In the body, vitamin D is responsible for maintaining normal blood levels of calcium and phosphorus, and helping to build strong bones. Vitamin D may also contribute to the overall health of the cardiovascular system. It works with other vitamins, minerals and hormones to promote bone mineralization. Research shows that vitamin D may help support a healthy immune system by regulating lymphocyte function, cytokine production and macrophage activity. Studies also show that Vitamin D may improve seasonal mood disorders.

Take 1-2 tablets daily with a meal.

Vitamin D was discovered as researchers worked to end rickets, a bone disease in children, in the early 20th century. Sir Edward Mellanby discovered that cod liver oil—a source of vitamin A—could alleviate symptoms of rickets. Later, Professor Elmer McCollum tested cod liver oil without vitamin A. When it still prevented rickets, he assumed that a yet-undiscovered nutrient was responsible. He named this nutrient vitamin D.

In 1937, vitamin D3 was identified by former Nobel-prize-winner Adolph Windaus and his associate. They found that vitamin D3 formed in the skin after it was exposed to sunlight. In 1952, a team of researchers discovered that vitamin D did not actually put minerals into the bone, but rather mobilized calcium from the bone into the plasma. This led to the understanding of vitamin D’s role in maintaining serum calcium, which affects both skeletal strength and neuromuscular function.