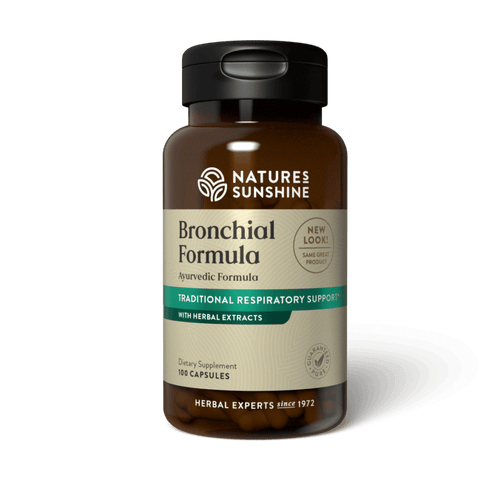 Don’t let pollution, dust, pollen and other respiratory irritants get you going! Experience the timeless wisdom of an authentic, Indian herb formula that is used traditionally to nourish the respiratory system. In Sanskrit, the word Ayurveda means "The Science of Life". This alternative medicine system began in India more than 5,000 years ago. It stems from the ancient Vedic culture and was passed down through oral tradition for thousands of years. Ayurvedic philosophy is based on balance and energy, and it incorporates lifestyle, diet and herbs. Our non-GMO formula features herbs specially chosen for their reputation in Ayurvedic tradition. Add to this, our partnership with a trusted mullein vendor we have known for 40 years who provides employment opportunities that have supported some rural families for generations.

The respiratory system regularly encounters airborne particles such as microorganisms, pollutants, pollens and dust, and protects delicate body tissues. As a result, the functions of the lungs and bronchi can be affected.

This Ayurvedic formula nourishes the lungs and bronchi and helps support the respiratory system. This formula, developed in concert with Indian Ayurvedic masters with herbs direct from India, provides nutrients necessary for respiratory health and function.

Ancient Greeks and Romans were known to use licorice root for health benefits. And Traditional Chinese Medicines rely on licorice for respiratory, digestive and reproductive system support.

The Myrica nagi evergreen tree grows up to 50 feet tall in the higher elevations in some parts of southeast Asia and China. Its small-seeded fruit is both tasty and a valuable crop.

In the 17th century, mullein broth was given to cattle that developed a cough. This may explain the nickname bullock’s lungwort.

In addition to Ayurveda, both Traditional Chinese and Tibetan medicine have used spiked ginger lily root for its many healthful properties. And people in Uttarakhand—near the India/Tibet border—chew this rhizome to freshen their breath.