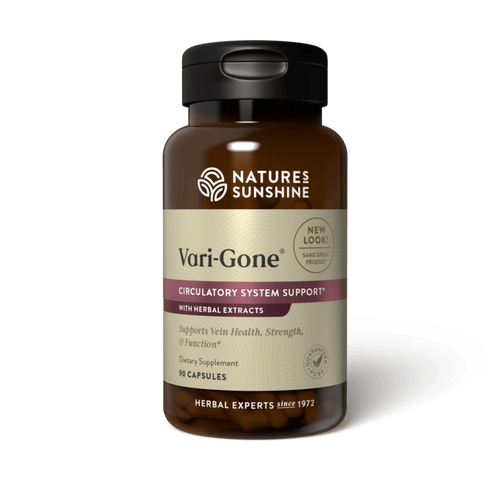 Vari-Gone features horse chestnut, rutin and vitamin C to tone, strengthen and nourish veins, improving their health and function. It also enhances the elasticity and conditioning of vein walls. Vari-Gone supports and strengthens blood vessels, and encourages blood flow throughout the body. It’s also a clean, safe product you can feel good about. Our featured botanicals—horse chestnut seed, rutin, fenugreek seed, lemon bioflavonoids and hesperidin—are all non-GMO, vegan and gluten-free for a cleaner nutritional experience.

Vari-Gone is designed to tone, strengthen and nourish veins. It enhances the elasticity and conditioning of vein walls. Continued use may minimize the appearance of varicose and spider veins. This formula may not only improve appearance, but may also support optimal blood flow to the heart and legs.

Take 1 or 2 capsules twice daily with a meal.

NOTE: Individuals who are taking prescription anti-coagulant medicines, and pregnant or lactating women should consult their health care providers before using this product.

Nature’s Sunshine introduced Vari-Gone in 1999, and legs have been looking and feeling better ever since! This formula perfectly illustrates “the whole is greater than the sum of its parts.” Hundreds of years ago, horse chestnut trees grew natively in Great Britain, Spain and other parts of Europe. Now they’re found throughout the northern hemisphere, decorating city parks and streets alike.

Lemons are likely native to China and perhaps Burma. They grow all over the world in temperate climates without frost, including the southeastern and southwestern US, and Italy.

In the 1930s, Hungarian chemist Albert Szent-Györgyi discovered and named ascorbic acid (vitamin C), which literally means “anti-scurvy.” In 1936, he found a group of bioflavonoid compounds that he named vitamin P. Today we call this rutin. He won the Nobel Prize for Medicine in 1937 for his discoveries and for his description of the oxidation process.