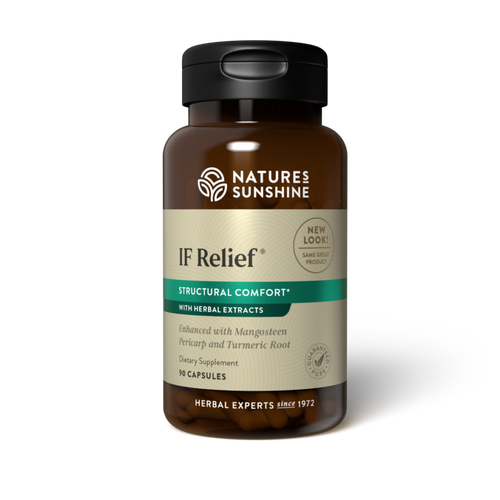 Sometimes we all overdo it. That is where IF Relief fits in. Its herbal extracts support the body’s natural process for combatting physical stress after exercise and massage while providing white willow bark for natural pain relief. IF Relief anti-inflammatory ingredient blend is the natural choice to help keep you going strong. Last of all, our botanicals are ethically sourced and non-GMO, because that’s what works best for both you and us.

IF Relief contains a combination of herbal extracts that may support the body's natural process for dealing with muscle pain following exercise and massage.

Turmeric spice is used in Indian and Chinese medicine and is a major component of curry powder.

Curcumin, an active ingredient in turmeric root, has been studied extensively for its beneficial effects on health.

Mangosteen pericarp is a source of potent antioxidants called xanthones. The xanthone gamma-mangostin appears to partially modulate the production of prostaglandins.

White willow bark contains salicin. It appears to modulate the production of prostaglandins.

Boswellia has been used for thousands of years to offset joint discomfort, gut stress and heart support.

Mangosteen grows in Southeast Asia where it has been popular for hundreds of years. Its unique phytonutrients support cardiovascular and immune system health. The dark purple pericarp is especially rich in antioxidants and beneficial xanthones.

Turmeric spice was used anciently by the Vedics in India, and for religious ceremonies in Southeast Asia. Marco Polo described it in wonder. Today turmeric is cultivated primarily in India where it’s referred to as haldi, manjal or yellow root.