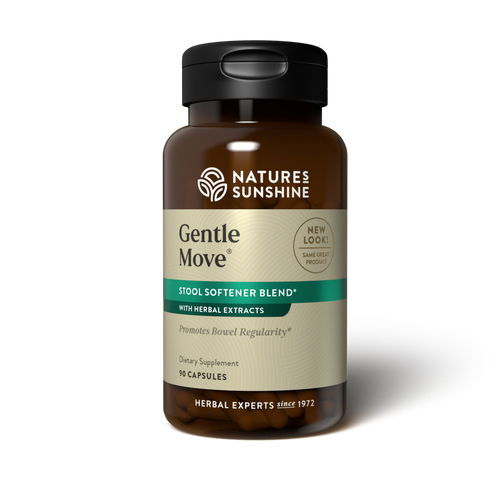 Bowel movements are only natural, so it makes sense that you’d want pure, natural support when you experience intestinal troubles. This product naturally and gently keeps things moving. This unique blend of magnesium and soothing, non-GMO herbs like slippery elm was researched and specially formulated to attract water in the colon, help soften stool, and provide soothing bowel support. Also features triphala extract, a traditional, wild-harvested Ayurvedic laxative. Wildcrafted and sustainably sourced by hand, our non-GMO slippery elm is collected from forests across eastern North America and tested to ensure both purity and potency. Additionally, we’ve partnered with the same supplier for our non-GMO triphala fruit extract for over 10 years. They work with local collectors, many of whom are women, to harvest the Amalaki, Bibhitaki and Haritaki used in our triphala blend.

Maintenance: Take 2 capsules at nighttime or before bedtime. In times of irregularity and bowel distress: Take up to 6 capsules per day for up to 7-10 days.

Isolated by English chemist Sir Humphry Davy in 1808, magnesium is named after Magnesia, the Greek name for the area in which the element was discovered. Magnesium is a critical nutrient for overall health as it plays a role in hundreds of enzymatic reactions and metabolic processes in the body.

A prominent herbal blend featured in Ayurveda for over 1,000 years, triphala is classified as a tridoshic rasayana that promotes longevity and rejuvenation. Touted for its support of the gastrointestinal tract, this combination of rejuvenative herbs has been applied to many traditional uses. Recent studies have also looked into a number of other potential applications, including antioxidant, immune and adaptogenic support.

Native Americans used slippery elm as a healing salve and poultice for wounds, burns and various skin conditions. Early European settlers adopted this herb and its traditional use spread to include coughs, sore throat and gastrointestinal issues.

Marshmallow’s history as a health supplement began in the 9th century, but it didn’t become the more commonly known treat until French confectioners made Pâté de guimauve roughly 1,000 years later. While the Greeks used marshmallow to dress wounds and soothe throats, Roman, Egyptian and Arab practitioners expanded its use for a variety of health needs.