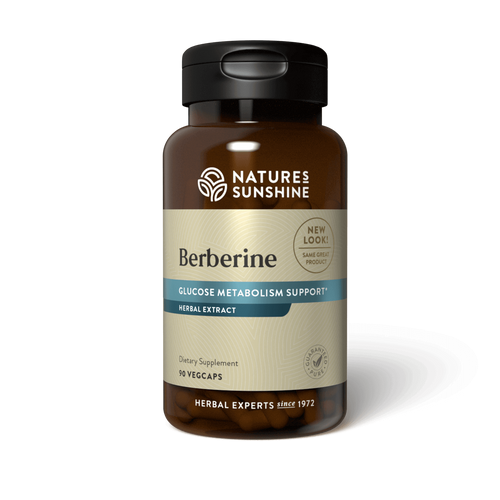 Berberine, extracted from Indian barberry root, helps activate an enzyme that helps cells use glucose more efficiently and  goes a long way to supporting a healthy gut biome.  This product is non-GMO and harvested high in the Himalayas in pure, potassium-rich soil for maximum efficacy. The Himalayan Mountains provide rich biodiversity, featuring a host of natural plant life. Berberis aristata flourishes in this region and the adjoining hill country. The root’s berberine content and activity has been found to be dependent on the altitude at which the plant grows and its soil content--thriving in a potassium-rich environment. Our relationship with our berberine supplier goes back more than 15 years and includes active involvement with the farming community and wild crafters, as well as personal audits of their processing facilities. Our berberine is non-GMO verified, and Kosher and Halal-certified.

Additionally, Berberine IR supports healthy gut performance to help combat endotoxins. High-carbohydrate diets change the microflora of the gut, increasing bacteria that produce endotoxins. These endotoxins are released into the bloodstream and interfere with normal glucose metabolism. Berberine specifically supports gut health by inhibiting the ability of endotoxins to bind to muscle cells, thus helping to support proper glucose metabolism function. Its unique mechanism of action makes Berberine IR an excellent option for those who wish to start or strengthen their glucose management regimen. Support your body's ability to metabolize blood glucose with Berberine IR.

Berberis aristata is an Indian medicinal plant from the family Berberidaceae. This Ayurvedic shrub was used anciently by many cultures. The Egyptians used barberry fruit for immune support. In India, they used barberry fruit to help balance the fluid levels in the bowel. Russian proponents used barberry for circulatory concerns. And in Iran, they employed it for its ability to settle and soothe the circulatory and nervous systems. Other names for this species include Indian berberi, tree turmeric, jaundice berry, Daruharidra and Darvi. Native to the mountains of India and Nepal, it now grows in temperate climates across Europe, Asia and America.