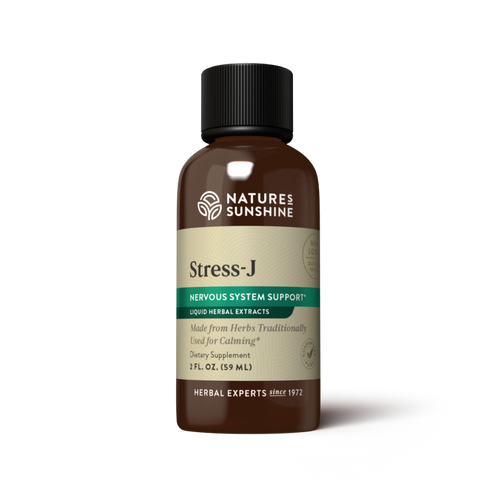 Developed in partnership with a genuine American herbalist, the late Jeanne Burgess, Stress-J has been popular for decades and has been proven over time. Each ingredient in this formula works in harmony with other herbs to offer valuable nervous system support. The option of having a natural, herbal formula to help with stress strikes a positive chord with many health enthusiasts. Top it all off with awesome ingredients for a feel-good way to feel good--like chamomile flowers grown wild on the prairies and in meadows where expert harvesters pick them by hand. They’re organic and processed only with pure water--never any solvents.

This anti-stress formula provides nutrients to help facilitate proper function of the nervous system. Passion flower is a natural support to relaxation centers of the nervous system and has been used historically to help with restlessness. Calming and soothing, it doesn't affect mood or orientation. Fennel has long been known to strengthen the digestive system, where emotional stress is most likely to center. Feverfew is an aromatic herb able to help the body deal with muscular tension. Hops is considered a tonic herb and is especially recognized for promoting sleep and helping the body deal with occasional restlessness. It also benefits the digestive system, thereby helping to prevent intestinal stress from undigested food. Chamomile is known for supporting nerve health and mental alertness. It also aids digestion and helps with circulation. It is soothing with no harmful side effects. Marshmallow has demulcent effects on the digestive tract. It has been historically used for the respiratory support and to soothe mucous membranes.

The incredibly, beautiful passionflower was grown by Aztecs, Incas and other native South American peoples. Named for its representation of the crucifixion of Jesus Christ, passionflower was used as both food and medicine by Native American tribes. It quickly spread to Europe after settlers arrived.

Feverfew, which resembles a bushy daisy plant, can be traced to the Balkan region of eastern Europe. It now grows all over the western hemisphere as well as Europe.

Probably most famous for its use in breweries around the world, hops has commonly been sought for anxiety, nervousness and restlessness in folk medicine. It has also been used traditionally to support sleep and relaxation, and to support gastric function.

Chamomile is one of the oldest and most well documented medicinal plants in the world. People drink more than one million cups of chamomile tea every day!