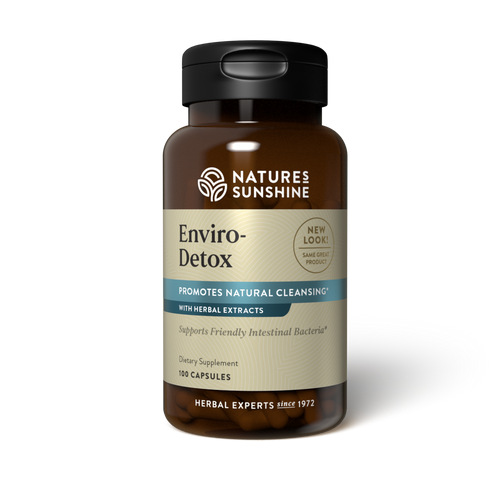 Pollutants and toxins are everywhere—the air you breathe, the water you drink, the food you eat and the soil it’s grown in. They build up in the body, so escort them out with Enviro-Detox! This awesome blend includes sustainably sourced, non-GMO herbs like burdock, red clover, and milk thistle that have been used traditionally for detoxification--plus B. coagulans to replenish friendly flora, and pepsin for digestive help. Our superior strain of B. coagulans produces the favored form of L(+) lactic acid that has been shown to help maintain a balanced gut microbiome and delivers extreme stability in both high and low temperatures and in the human stomach. Our material is manufactured in a state-of-the-art facility dedicated to this single strain to avoid contamination and to maintain batch consistency. It is vegan-sourced, non-GMO project verified, and Kosher and Halal-certified. Our 20-year relationship with this award-winning partner includes in-person audits by Nature’s Sunshine personnel.

Environmental pollutants and toxins can build up in the body, slowing the body's natural cleansing processes. Enviro-Detox is a combination of 13 nutrients selected for their ability to provide ongoing support to the body's organs that may play roles in detoxification: the liver, kidneys, lungs, bowels and skin.

The liver performs over 500 functions in the body. Providing clean blood is one of the most important of these. Half of the herbs in this formula (sarsaparilla root, red clover flowers, yellow dock root, dandelion root, burdock root and Echinacea purpurea root) are well-known promoters of the natural blood purification process. Enviro-Detox also contains a natural immune system supporter, echinacea, to help send toxins on their way as the body begins to release them. Cascara sagrada helps the main eliminative channel rid the body of these toxins being released and helps to cleanse the intestines of fecal matter. In addition, fenugreek helps loosen and dissolve intestinal mucus, and marshmallow root helps the body remove this mucus. Enviro-Detox is uniquely designed to clean and build the immune system simultaneously and, with the addition of pepsin, aids digestion by breaking down the food proteins in the stomach.

NOTE: This product contains cascara sagrada. See your health care provider prior to use if: pregnant or nursing, any medical condition exists, or when taking any medication. Read and follow recommendation carefully. Not intended for prolonged use. Do not use if diarrhea, loose stools or abdominal pain are present or develop. Use of this product may worsen these conditions and be harmful to your health. Chronic diarrhea can result in serious illness.

The Chinese have promoted burdock as a healthy, nutritive food for ages. Its use spread across Asia and into Western civilizations over the last several hundred years.

Pepsin is widely considered the first enzyme of animal origin to be discovered. In 1836, Theodor Schwann discovered and named it after the Greek word peptein, which means to digest.

B. coagulans was first isolated in 1915 by B.W. Hammer at the Iowa Agricultural Experiment Station after a batch of evaporated milk became coagulated. This strain gained popularity in veterinary circles, and it has been used widely in ranching to help pigs, cattle and chickens to thrive. Luckily, humans have discovered and experienced its benefits too!