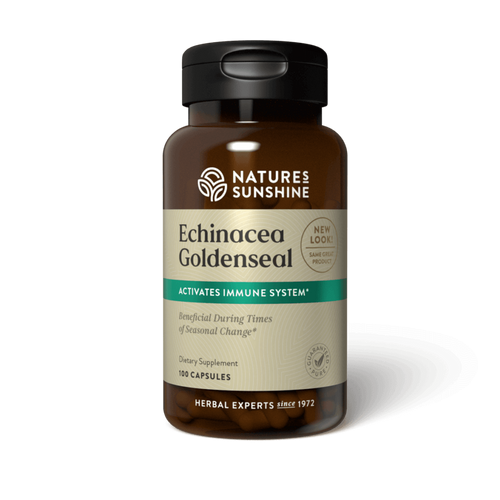 Wake up your immune system with a 1-2 punch...Purple coneflower, AKA  echinacea, and goldenseal root activate your immune system and support your body during times of seasonal change. Our echinacea is harvested in partnership with Baltic farmers using fair pricing agreements.

Members of the Echinacea genus contain polysaccharides, alkylamides, polyenes and glycosides that promote the optimal function of the immune system. Echinacea supports the normal body functions of clearing toxins and maintaining wellness.

Several laboratory and animal studies suggest that echinacea contains active substances that enhance the activity of the immune system, have antioxidant activity and help support a healthy inflammation response. Goldenseal root contains the powerful alkaloids berberine and hydrastine that help the body maintain strong immunity. It has become one of the most popular herbs in America. Goldenseal may also benefit the digestive and circulatory systems.

NOTE: Pregnant or lactating women should not take goldenseal.

Centuries ago, Native Americans turned to the healing power of echinacea, using it traditionally for colds, coughs, sore throats and pain. More recently, herbal practitioners have embraced echinacea to support the body’s natural defenses. After it became the most popular herbal remedy in the US in the early 1900s, echinacea’s cultivation spread to Europe. Named after the Greek ekhinos, meaning hedgehog (for its spiky, conical head), echinacea rose to immune system superstardom in the herbal revival of the 1970's, but only in the last few decades have we discovered the many constituents that power this amazing plant’s benefits. Today fields of pink and purple coneflowers can be found throughout the US and Canada.

Native Americans traditionally used goldenseal to support the mucous membranes of the respiratory, digestive and urinary tracts. Herbalists of the early 20th century considered it a critical herb for stomach and intestinal issues.