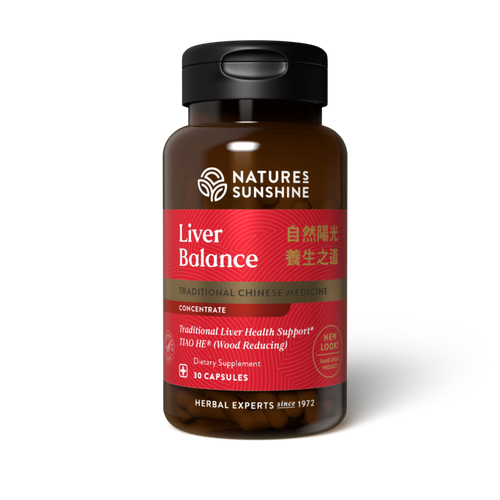 According to the timeless wisdom of Traditional Chinese Medicine, your liver is linked to mood, stress and energy. This harmonizing, concentrated blend of Chinese herbs optimizes liver health and supports the digestive and nervous systems. Key herbs include bupleurum (a “cooling herb”), scute, peony and atractylodes. Traditional use cites support for the nervous system during mental stress and support of the upper digestive system during tension and distress. For more than 35 years, we’ve partnered with the same incredible vendor to collaborate with farmers in traditional communities to ethically source the finest Chinese herbs for these formulas.

This formula contains the same herbs as Liver Balance, but in a highly concentrated blend. Liver Balance is designed to support the needs of a stressed wood constitution. The Chinese call this formula tiao he, which can be translated to mean "harmonizing." In Traditional Chinese Medicine, it is used to support both the digestive and nervous systems, optimizing liver health and reducing stress.

Its primary herbs--scute, peony, bupleurum and atractylodes--have been used traditionally to maintain normal nervous system function during mental stress and to support the upper digestive system during tension and distress. Bupleurum is the most important "cooling herb" according to Chinese herbology. It is believed to aid the upward flow of chi, or the body's living force, thereby strengthening the body against stress. Other herbs support these functions in what the Chinese refer to as a "wood-reducing" formula.

Take 1 capsule with a meal daily.

Eastern gardens have featured peonies for over 4,000 years, and they can now be found throughout Asia, North America and Europe. A feature of ancient Greek mythology, peonies were highly regarded for the benefits of their roots, seeds and flowers.

Widely accepted to have originated in the Shangdang region of China, ginseng was first recorded in Chinese medicine over 2,000 years ago. Cultivation of this herb spread throughout Asia in the 1700s, and in the years since it has become one of the most widely used herbs the world over.

Ginger root (or rhizome) was used by ancient Indians and Chinese at a tonic for common ailments. Although it originated in Southeast Asia, its use spread throughout the eastern and western civilizations where it was valued for cooking, digestive support and its medicinal merits. Ancient Greeks and Romans were known to use licorice root for health benefits, and Traditional Chinese Medicines rely on licorice for respiratory, digestive and reproductive system support. Licorice has been a key part of many Chinese herbal formulas for thousands of years.