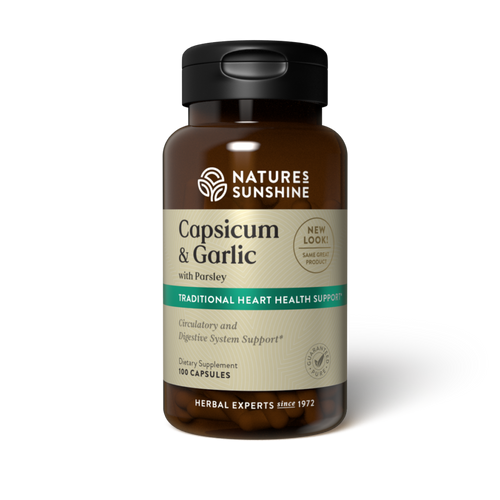 Capsicum is one of the hottest spices. It has a warming strength that benefits digestion and circulation. Capsicum may enhance blood flow. Garlic is high in sulfur. It is also useful in helping the digestive, respiratory, immune and circulatory systems, as well as aiding in the regulation of the glandular system. Parsley contains a lot of chlorophyll, which acts as a natural deodorizer. It also contains potassium, which helps balance sodium levels, and manganese to help manage calcium levels and nourish the nerves.

Capsicum was known to Columbus and other early explorers. Soon thereafter, this medicinal herb native to Central and South America began “circulating” around the world. Ayurvedics used it, Traditional Chinese Medicine adopted it, and practitioners across the globe took advantage of its unique stimulating properties.

Referenced independently in ancient medical texts in Egypt, Greece, Rome, China and India, garlic has been a mainstay of herbal practitioners for thousands of years.

Native to Tunisia, southern Italy and other Mediterranean regions, parsley is still widely used in cooking worldwide. Centuries of folk use teach us that parsley was employed for urinary and kidney support, detoxification and more.