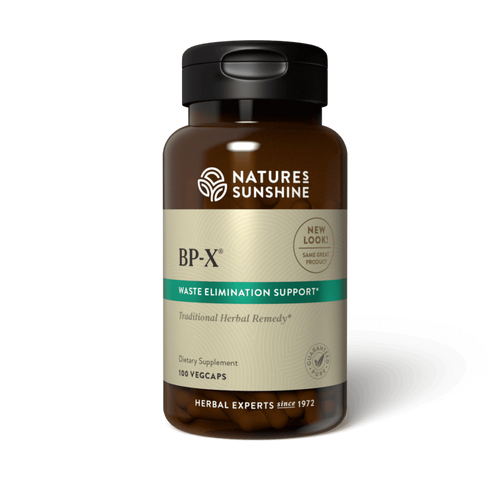 Love your liver? Grateful for your gallbladder? Show it! BP-X is a time-honored herbal remedy that helps support intestinal, digestive and hepatic health as it assists with liver, gallbladder and bowel functions. It also supports the elimination of waste. And it’s loaded with "good-for-you" ingredients that are non-GMO verified and Kosher. Quality ingredients make a better formula.  Pau d'Arco's active components, including lapachol, provide important properties for immune health. Research indicates that pau d’arco extract seems to help prevent microbes from getting the oxygen and energy they need to thrive. Harvesting pau d’arco is complicated as these trees are a protected species in Brazil. Nature’s Sunshine works with experienced partners with whom we have done business for more than 20 years. They ensure that the inner bark material—a by-product from legal wood harvest—is carefully collected and legally shipped.

In most cases, internal toxicity manifests itself in the skin and other organs and disturbs normal mood and brain function. When these toxins are removed from the body, other concerns may vanish as the body restores itself. BP-X also assists with colon cleansing.

NOTE: This product contains cascara sagrada and buckthorn. See your health care provider prior to use if: pregnant or nursing, any medical condition exists, or when taking any medication. Read and follow recommendation carefully. Do not use if diarrhea, loose stools or abdominal pain are present or develop. Use of this product may worsen these conditions and be harmful to your health. Chronic diarrhea can result in serious illness.

According to records, pau d’arco was used by the Incas, Kallawayas and other native South American groups for its many healing properties. They called it taheebo or lapacho.

The Europeans brought red clover to America centuries ago, and it was quickly adopted by native residents who used it for respiratory system complaints, blood purification and as a support for aging women. Red clover is actually related to peanuts and beans!

Also called alder dogwood and arrow wood, buckthorn bark is a powerful herb celebrated for its ability to help loosen the bowels. This plant grows in Europe and North America.

Ever since it was introduced to Spanish settlers in the 1600s, cascara sagrada bark has been used as a natural laxative throughout the world. By the late 1800s, cascara was being exported overseas. Its popularity led to overharvesting in the 1900s, but cascara has made a healthy resurgence.