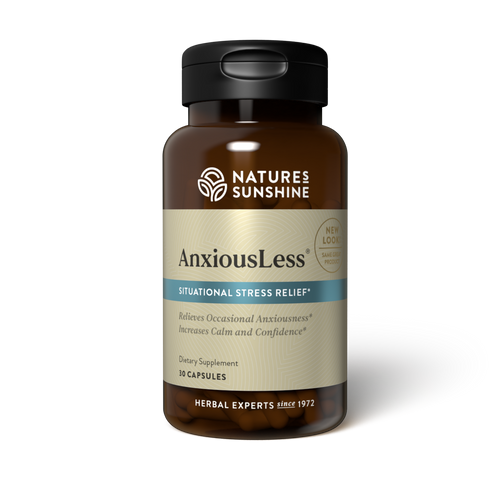 Big presentations, blind dates, traffic jams and unexpected visits... Life is full of moments that can put us on edge. So take a deep breath, think happy thoughts and try AnxiousLess. It helps with occasional anxiousness, leading you toward calm in the midst of a busy life.  No one else offers this unique formulation featuring Zembrin® brand Sceletium tortuosum and selected nutrients for nervous system support. Zembrin, which is rich in mesembrenone, grows on select farms in South Africa, where indigenous farmers cultivate plants and harvest them in partnership with the San Council. This group represents the San Bushman People in South Africa and promotes social responsibility by sharing profits on every bottle sold with the locals. Our partners also promote and assure maximum sustainability, so you can feel good about feeling good!

Anxiousless is 57% more effective than other competing products with just Zembrin® alone!

Zembrin® (Sceletium tortuosum extract)--Harvested in South Africa and used by locals for centuries, this herb supports the nervous system as it facilitates feelings of calm and supports a positive mood. This standardized patented extract represents the full, unaltered phytochemical profile of the plant.

L-Theanine--This unique amino acid increases the brains alpha wave activity, which seems to reduce occasional anxiety and encourage feelings of relaxation and calm without drowsiness. Studies have associated taking L-Theanine with improvements in both mental alertness and stress response.

Thiamin--Deficiency of this important nutrient has been associated with decreased levels of GABA, a key Central Nervous System metabolite tied to many mood and anxiety disorders.

Magnesium--Studies have shown that a diet deficient in magnesium can lead to increased anxiety and depression.

Zinc Supplementation with zinc has been shown to be significantly effective in reducing levels of both anger and depression.

* These statements have not been evaluated by the Food and Drug Administration. This product is not intended to diagnose, treat, cure or prevent any disease.

Sceletium tortuosum grows in desert climes of South Africa. For more than 300 years, natives have gathered and used this plant. In 1685, Governor Simon van der Stel wrote that the natives chewing this plant were “of a very cheerful nature.”

Polish chemist Casimir Funk discovered thiamin in 1912. He termed it the “anti-beri-beri factor” for its ability to prevent a disease that had ravaged Southeast Asia. He isolated thiamin from the bran of brown rice. Prior to that, Christiaan Eijkman and Adolphe Vorderman had been studying the effect of diet on the body regarding polished rice versus brown rice. Later, English biochemist Frederick Hopkins confirmed their findings. And in 1929, Eijkman and Hopkins shared the Nobel Prize for Medicine for this work.

Magnesium  was  named for the region in Greece where this mineral compound was first found. It has a soothing effect on the bowel, but it’s also critical to nervous system balance and structural health.