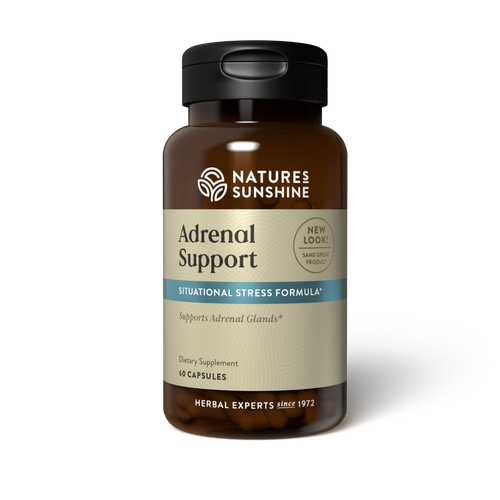 When you’re under constant stress, the build-up of stress hormones can leave you feeling fatigued, affect your sleep patterns, and weaken your immune system. Support your body and feel better with this blend of vitamins, minerals, enzymes, and adaptogenic herbs.

Adrenal Support combines a synergistic blend of adaptogenic herbs, vitamins, minerals, and enzymes with adrenal glandular substance to fortify the adrenal glands and bolster their function. As stress hormones produced in the body are regulated by the adrenal glands, it is important to provide a potent combination of ingredient to fuel their healthy function. Our superior adaptogenic herbs deliver neuroprotective properties, helping to provide natural support and balance to the nervous system, as well as help support a healthy balance of stress hormones in the body to ensure mental equilibrium and overall comfort.

Certain hormones in the body--called stress hormones--prepare the body to deal with stressful situations by increasing the heart rate and the force of contraction and blood flow to the heart, liver, and to skeletal and adipose tissue. These stress hormones are produced and regulated by the adrenal glands. They also dilate airways to the lungs and increase blood levels of glucose and fatty acids. The adrenal hormones and their functions are linked to virtually all of the body systems. Thus, many physiological processes and bodily functions, including cardiovascular health, sex drive, pH balance, skin conditions, energy levels, mood and overall psychological outlook--often correlate to adrenal gland function.

Adrenal Support is a synergistic blend of vitamins, minerals, enzymes and adaptogenic herbs specially formulated to nourish and strengthen the adrenal glands and to promote glandular secretion.

Recognized as an element in 1755, magnesium was first isolated in 1808 by Sir Humphry Davy, an English chemist. Though it can be extracted from various minerals, magnesium is often obtained from seawater.

In the 1930s, Hungarian chemist Albert Szent-Györgyi discovered and named ascorbic acid, which literally means “anti-scurvy.” Many sailors had suffered from scurvy on or after long sea voyages without access to fresh produce. Later Szent-Györgyi discovered rutin, a bioflavonoid nutrient that supports vitamin C’s activity. He won the Nobel Prize for Medicine in 1937 for his discovery and his description of oxidation. American biochemist and two-time Nobel Prize winner Linus Pauling studied scientific literature on vitamin C and became a true advocate for this nutrient, penning Vitamin C and the Common Cold in 1970.

Ancient Greeks and Romans used licorice root for health benefits. Traditional Chinese Medicines relied on licorice to provide respiratory, digestive and reproductive system support. Widely used in Traditional Chinese Medicine, schisandra is known as the five-flavored fruit. Possessing a remarkable taste that is sour, sweet, bitter, salty and pungent, it has been used for centuries for its adaptogenic benefits.